“I’m a remarkable woman, always was, though none of you seemed to think so.” – May Morris 1936

(written in reference to herself in a letter to George Bernard Shaw, a former partner)

May Morris (1862-1938), the younger of William and Jane Morris’s two daughters, was a leading designer and maker in the British Arts and Crafts Movement. Her extraordinary accomplishments were largely forgotten until the end of the twentieth century, when public interest was renewed. While May is better known in the present day, further study of her life and work is required and actively taking place.

This exhibition is currently on display at our premises until September 24th, 2022. Details of our opening hours can be found here.

Please enjoy brief highlights of the current exhibition below. 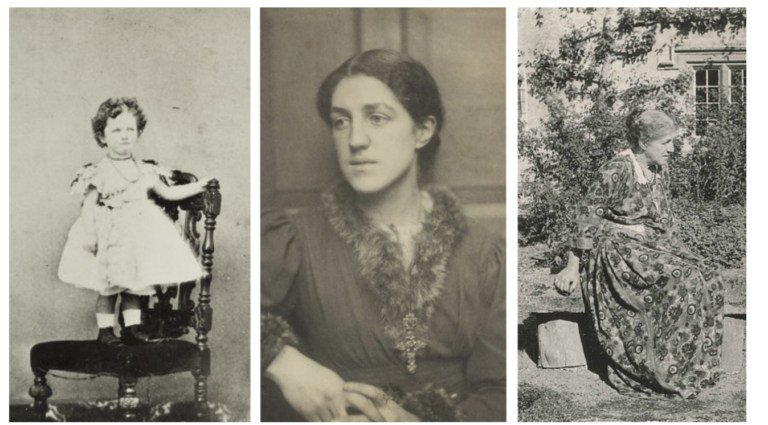 In 1878 May enrolled at the National Art Training School (later known as the Royal College of Art) where she specialised in embroidery. Following her studies, May worked at her father’s company, Morris & Co. where she designed wallpaper. Between 1881-1886, May designed three papers, titled ‘Honeysuckle’, ‘Horn Poppy’ and ‘Arcadia’. The papers were well received by Morris & Co. clientele and remain popular designs today. Despite May’s talent for wallpaper design, these were the only three papers she created for the firm. In 1885 she took over management of Morris & Co.’s embroidery department. Her three wallpapers stand as important examples of her wide-ranging skill and particular expertise in design. 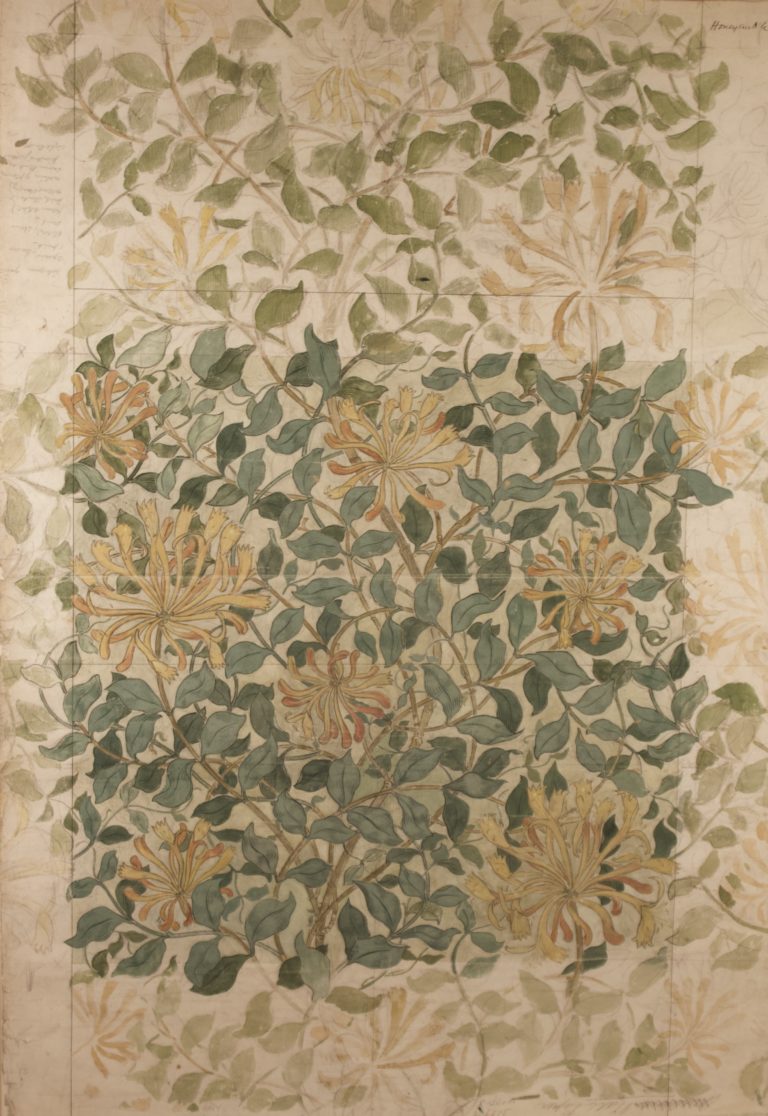 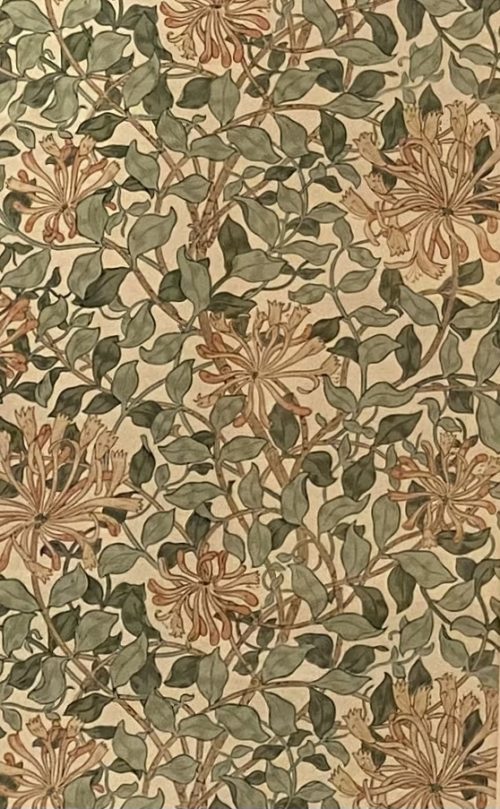 Design for ‘Honeysuckle’ wallpaper, drawn by May Morris Circa 1879-1883 Pencil and watercolour on paper

‘Honeysuckle’ wallpaper, designed by May Morris Circa1883 Colour woodblock print on paper, manufactured by Jeffrey & Co. for Morris & Co.

In 1885, at the age of 23, May took on the management of Morris & Co.’s embroidery department. May learned embroidery as a child from her mother and perfected the skill at the National Art Training School. The department was first directed by Jane Morris, William Morris’s wife and her sister, Elizabeth Burden. While the department did well in its early days, May’s design skills were unrivalled and enabled it to expand. May designed pieces for private commission as well as for kits that could be purchased at the Morris & Co. shop for completion by the customer or bought ready-made.

May managed the embroidery department for 11 years, leaving the position in 1896, the year of her father’s death. Needlework remained an enduring passion throughout her life; she wrote a book on the subject titled Decorative Needlework, both lectured and taught on the topic and continued to complete a small number of private commissions.

‘Orange Tree’ embroidery, designed and stitched by May Morris Circa 1897 Silk embroidery on linen
May is likely to have designed this piece after a sketch she drew of a sour orange tree during a trip to Egypt in 1897. The work is believed to have been made as a wedding present, as orange blossoms were a popular bridal flower. 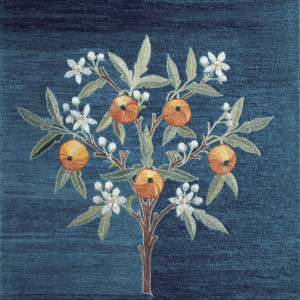 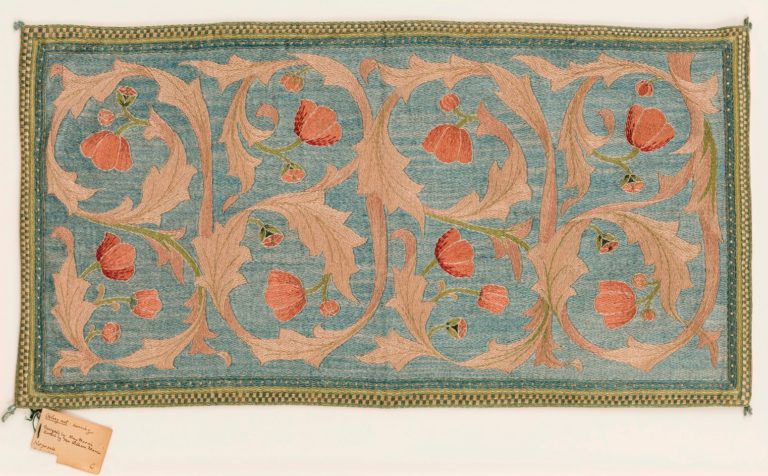 ‘Westward Ho!’ embroidery, designed by May Morris, stitched by Jane Morris Early 1880s Silk embroidery on unbleached linen (above)
This piece is named after the village on the North Devon coast. The village is home to the United Services College, at which Cormell Price, a close family friend of the Morrises, was headmaster. It is assumed that Price commissioned this work for the College. The work is a lovely example of collaboration between mother and daughter, as May created the design and Jane Morris completed the embroidery.

Design for ‘Westward Ho!’ embroidery, drawn by May Morris Early 1880s Pencil and watercolour on paper (below)

‘Minstrel with Cymbals’ embroidery, stitched by May Morris Circa 1885 Silk, gold and metal embroidery on linen
The design for this embroidery is based on a stained glass window by William Morris c. 1867. As figures rarely feature in May’s work, it is likely to have been created to demonstrate the range of her skill for potential commissions.

Towards the end of the 19th century and into the 20th century May Morris became prominent in the public eye. Her expertise on embroidery gained recognition and she authored numerous articles and a book on the subject. Over the winter of 1909-10 she embarked on a lecture tour of North America where she delivered a range of talks on subjects from the history of jewellery to medieval embroidery.

May also became interested and involved in preserving and sharing her father’s legacy. Such efforts included ensuring the future protection of Kelmscott Manor, significant involvement in the Victoria and Albert Museum’s 1934 William Morris Centenary exhibition and both editing and authoring a number of books on Morris. May’s work in memorialising her father’s legacy is often overlooked but significantly added to the public knowledge of William Morris. 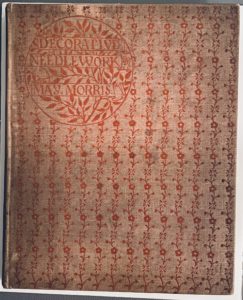 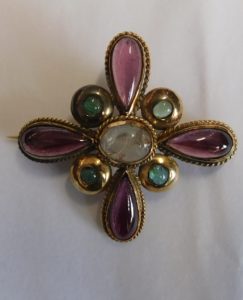 Decorative Needlework written by May Morris 1893
Board and linen binding, paper pages, published by Joseph Hughes & Co. London
May authored this book in 1893 as an aid to those learning needlework. It offers practical instruction alongside detailed illustrations and encourages readers to study historic textiles in museums as well as the natural world for inspiration. May writes; “I have tried to show that executive skill and the desire of and feeling for beauty, realized in a work of definite utility, are the vital and essential elements of this as of all other branches of art, and that no one of these elements can the embroideress neglect or overlook if her work is to have life and meaning.”

Brooch, designed and made by May Morris Circa 1903-16 Gold, almandine garnets, emeralds and water opal
In the late 1890s May experimented with jewellery making. In 1897, she was teaching embroidery at the Central School of Arts and Crafts, where she would have had access to the training and equipment required for the craft. May favoured simple jewellery, rather than ornate, preferring to use gemstones rather than diamonds, her pieces were often inspired by historic ornaments.

The Women’s Guild of Arts

May was a passionate socialist and feminist. In 1907 she was instrumental in the founding of the Women’s Guild of Arts. The group was set up in opposition to the exclusively male Art Workers’ Guild. May explained in an address to the Guild in 1907; “As I understand it, we are a body of women joined together as such, men always having their own organisation, to do what we are doing i.e. to keep to the highest level the arts by which and for which we live, to keep fresh and vital the enthusiasm, the belief – all the things which are the impetus of human endeavour.”

The Guild held regular meetings and lectures and exhibited the work of its members at such impressive venues as The Arts and Crafts Exhibition Society and the Royal Academy. Many notable female artists were members, including; Evelyn De Morgan (painter), Georgie Gaskin (jeweller), Mabel White (sculptor), Katherine Adams (bookbinder), Mary Annie Sloane (artist and engraver) and Marianne Stokes (oil painter). The Guild remained active until the early 1940s, disbanding as similar organisations began to admit both sexes. 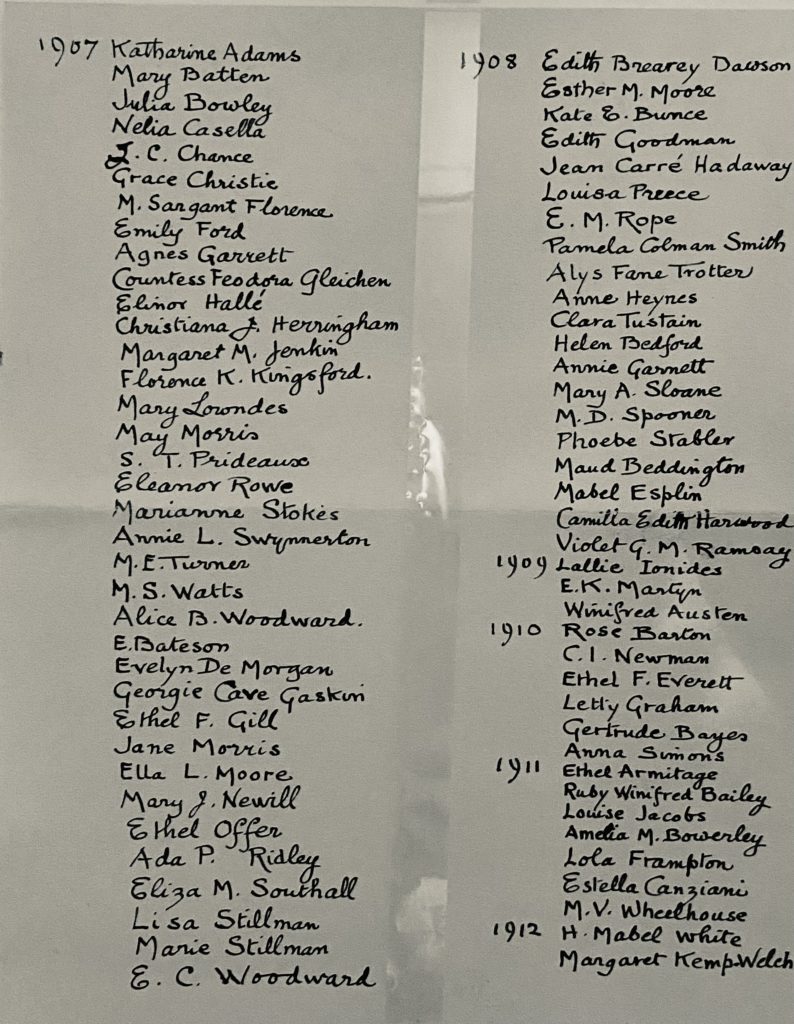 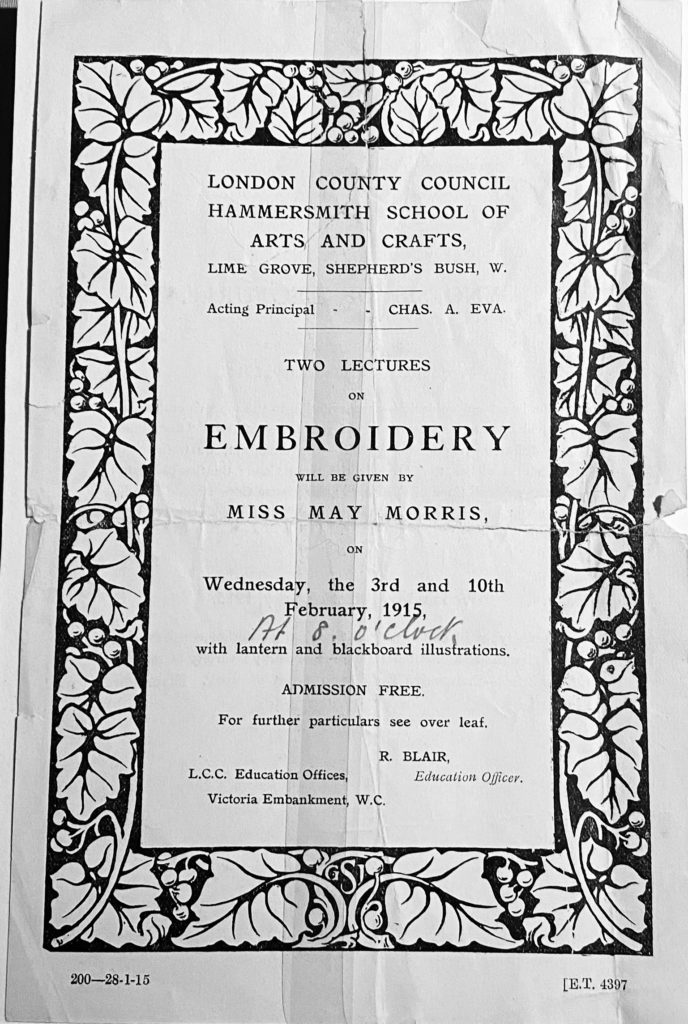 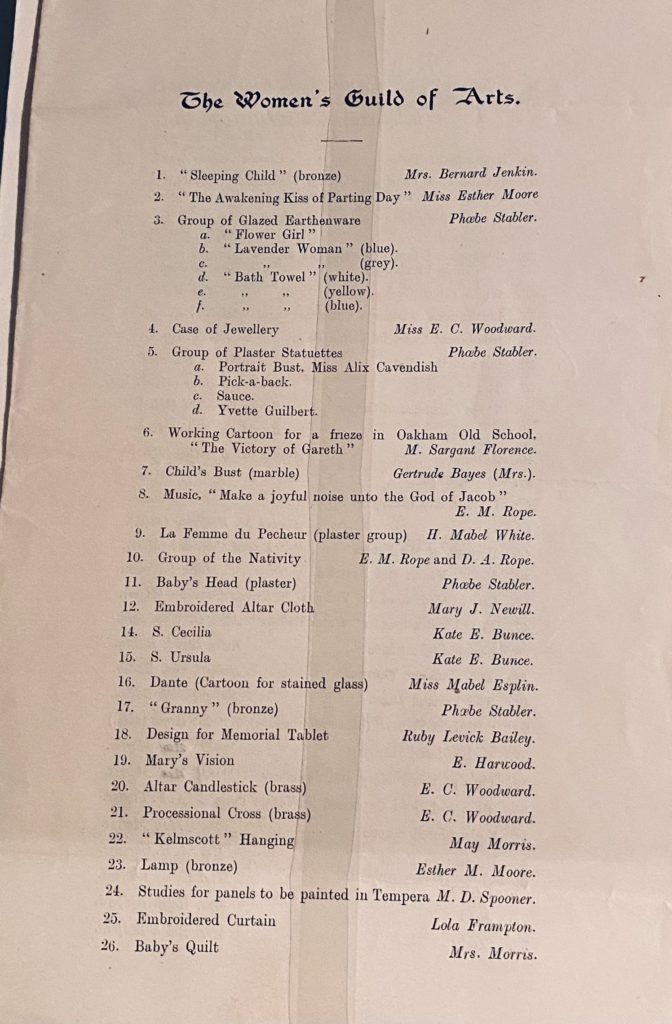 A Poem on May Morris

Click here to read Sarah Doyle’s poem ‘Threads’ which celebrates May Morris’s achievements as a designer and creator of exquisite embroideries, and weaves images present in her needlework.

Sarah is Poet-in-Residence at the Pre-Raphaelite Society

THANK YOU FOR VISITING OUR ONLINE EXHIBITION!

The William Morris Society is a registered charity.  If you are able, please make a donation to help us continue our education work, to care for our unique collection, and to preserve the legacy of William Morris.

Any amount, large or small, makes a difference! Thank you!