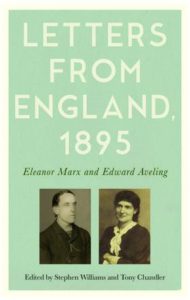 Having worked alongside William Morris during the 1880s, first in the Social Democratic Federation and then the Socialist League, Eleanor Marx and Edward Aveling were by the end of the decade seeking to establish a socialist party that could champion labour’s political interests at national and municipal level, a project that put them at odds with Morris. The publication of their previously untranslated Letters from England of 1895, will promote discussion of their subsequent political development and shared lives in an important year for the British socialist movement.

Stephen Williams and Tony Chandler are joint editors of this new publication.

The talk will take place on Zoom and attendance is by donation. Thank you for your support.