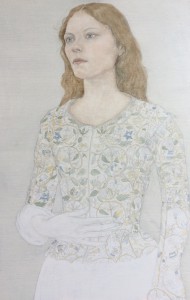 An exhibition of paintings, drawings and film inspired by female muses and their forgotten role as authors or artists.
By Kirsty Buchanan & Clara Drummond

Both Kirsty Buchanan and Clara Drummond have a mutual interest in the Pre-Raphaelite Brotherhood and the pursuit of sincerity and truth in their art, in particular the role that women played in the Brotherhood both as muse and artists in their own right. Together they will explore the inter-changing nature of the artist and the muse as both a maker and a subject. With a particular focus on the work and lives of Jane Morris, Lizzie Siddal and the complexities of their female relationships and collaborations. Buchanan and Drummond make material; conversations born out of hours of sitting for portraits and webs of discussions that weave between the archive at the William Morris Society, museum objects, books, stories, films and ongoing exchange of letters.
Alongside their drawings, paintings and films they will exhibit drawings, tapestries and letters from both Jane Morris and her daughter May Morris and the also the Women’s Guild, as a way of connecting the conversation between themselves and the Pre-Raphaelite women of the past. ​​