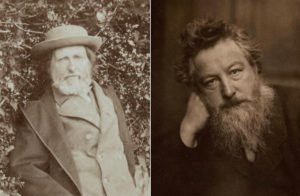 THERE IS NO WEALTH BUT LIFE: a series of lectures on John Ruskin and William Morris

John Ruskin and William Morris were born a generation apart. They were both wealthy men (at least to start with) but their political paths diverged. In this lecture Professor Hewison will ask what it was that Morris found in Ruskin that was so important to him, and why he should create a masterpiece of the Arts & Crafts movement, his reprint of Ruskin’s “Nature of Gothic”, in Ruskin’s honour.

Robert Hewison is one of the world’s leading scholars on Ruskin and is currently an Honorary Professor at the Ruskin Centre, Lancaster University. As well as publishing a number of books on Ruskin, he has written widely on British cultural history.

This is the first event of There is No Wealth but Life: a series of three lectures examining connections and divergences between these two great Victorian thinkers and writers. Book for all three lectures through the link below at a discounted rate of £30 (non-members), £25 (WMS members) or £12 (students).