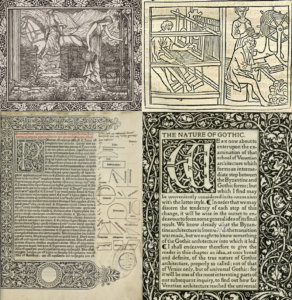 In accordance with his historical, aesthetic, and political theories, William Morris’s collection of medieval manuscripts, early printed books, and books about medieval art and material culture were meant to be experienced as art-objects, as reading copies, and as texts that provided a broad and stimulating picture of the everyday life of the past. In addition to their status as exemplars to support Morris’s historical and social theories, his library of (mostly German, but also French, Dutch and English) incunabula and manuscripts served to influence the design of books at his Kelmscott Press and thus by extension the entire small press movement. This lecture will draw on original research into Morris’s collecting practices to chart the influence of his library on his and his collaborators’ theories in the field of book design, and to outline some of the literary and historical principles on which the wide-ranging canon of Kelmscott texts was based.

Dr. Yuri Cowan is Professor in the Department of Language and Literature at the Norwegian University of Science and Technology (NTNU) in Trondheim, specializing in book history, nineteenth-century literature, and medievalism. His current book project is entitled William Morris and Medieval Material Culture.