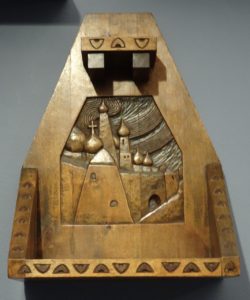 In the late 19th/early 20th centuries Russia experienced its own version of the Arts & Crafts movement. Artists, intellectuals and philanthropists were concerned that traditional ways of life, including ancient craft skills, would be lost as increasing numbers of the rural population were seeking more secure employment in towns and factories. As in many other European countries at this time, Russia was ‘discovering’ its artistic heritage and the emphasis on ‘Russian Style’ could be seen in architecture and all kinds of fine and decorative arts. Artists collected and drew inspiration from folk arts and set up workshops where villagers were trained to create furniture, textiles and other items that were exhibited and sold both at home and abroad.

Pamela’s talk will explore the ways in which William Morris’s ideas and the ethos of British Arts & Crafts had an influence in Russia.

Pamela Smith is a textiles expert, embroiderer and designer who has a life-long interest in Russian art and culture.