Online lecture: William Morris and the School of Art Needlework 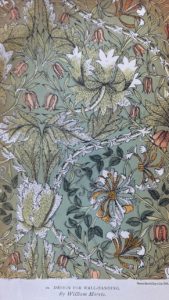 Having been lambasted in the press for its ‘incongruous motely of indigested decorative ideas’ at the 1874 International Exhibition of Art and Industry, the Royal School of Art Needlework (RSAN) immediately set about repairing its reputation. An advisory committee of gentlemen skilled in decorative work was appointed to oversee the artistic direction of the School and a special fund provided for the purchase of designs from eminent artists. Conscious of the RSAN’s desire to establish itself as a major outlet for contemporary art embroidery, the advisory committee recommended commissioning material from certain artists, including William Morris, Edward Burne-Jones and Walter Crane. In July 1875, Morris visited the School where he had a ‘long and favourable interview’, and promised designs ‘that could be proceeded with’. These were stitched under the direction of his sister-in-law, Elizabeth Burden, who oversaw the ‘Artistic Room’, specially set aside for working the designs of Morris and his contemporaries. This lecture will explore Morris’s collaboration with the RSAN, including designs such as Peacock and Vine and Honeysuckle displayed at the Philadelphia International Centennial Exhibition (1876), which enjoyed critical acclaim on both sides of the Atlantic and contributed to the RSAN’s growing reputation among Britain’s leading decorative art furnishers during the last quarter of the nineteenth century.

Dr Lynn Hulse is a Fellow of the Society of Antiquaries of London and co-founder of Ornamental Embroidery. Recent exhibitions include “The Needles Excellency”: contemporary raised work at the Ashmolean Museum, Oxford (2017) and the Knitting and Stitching Show (2018), and The Needle’s Art: contemporary hand embroidery inspired by an early Tudor pattern book at the Bodleian Library, Oxford (Winter 2021-2022). She has published widely on the development of art embroidery and is the editor of May Morris: Art and Life (2017), long listed for the 2018 William M. B. Berger prize in British Art History, and “The Needles Excellency”: English raised embroidery (2018). Her monograph on Lady Victoria Welby and the founding of the Royal School of Art Needlework will be published later this year.

This is an live online lecture, held on Zoom, and will not be recorded. Attendees are asked to keep cameras off and microphones muted throughout the talk.