Online lecture: The Art of Wallpaper: Morris & Co. in context 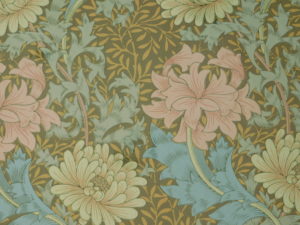 This lecture gives the inside story about William Morris and his impact on wallpaper design. We begin with fancy French papers – the most fashionable in 1834, the year Morris was born. By the 1840s these were rejected by British leaders of the design reform movement. Their influence on Morris, as well as the little-understood impact of Japanese design, are shown in this in-depth look at Morris & Co. The dispersal of the Morris style, the contribution of John Henry Dearle, and Morris’s contribution to the Arts & Crafts Exhibition Society’s influence are also highlighted. The design of the lately-published book of the same title (by Mary Schoeser) is explained too, in relation to Morris’s study and use of medieval manuscript forms.

This lecture will take place live online and will not be recorded.

Mary Schoeser MA FRSA has authored numerous publications including include World Textiles: A concise history (Thames & Hudson: 2003/2023); Silk (Yale University Press, 2007) and Textiles: The art of mankind (T&H, 2012/2013); Sanderson: The essence of English Decoration (T&H, 2010) and The Art of Wallpaper: Morris & Co. in Context (ACC Art Books, 2023). Formerly Archivist for Warner & Sons, since 1991 she has been consultant archivist to firms such as Liberty of London, as well as advising museums in Britain and America, including the Metropolitan Museum of Art. She lectures widely, and is Honorary Senior Research Fellow at the V&A, focusing on 19th century silks in Spitalfields and the East of England.