Online launch and talk: The Kelmscott Press Books in a 19th century context 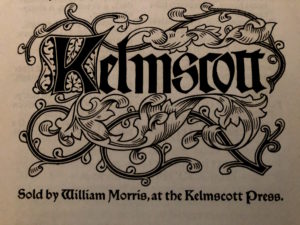 When the first Kelmscott Press books began to appear in 1891, there was a tendency – certainly encouraged by Morris himself – to compare them with the impressive publications of the earliest printers. It seemed to many observers at the time that the Kelmscott volumes rivalled the beauty of the best fifteenth-century European books and represented a radical departure from the practices of the Victorian publishing world. However, now, 130 years later, it is perhaps easier for us to notice the strong parallels between the activities of the Kelmscott Press and some other remarkable attempts in his own century to revive the early traditions of book typography. William Peterson will place Morris’s influential work at the Kelmscott Press in a Victorian context and examine the sometimes hidden links between the Kelmscott books and other examples of renewed vitality in British printing during the nineteenth century.

William S. Peterson (Professor Emeritus of English, University of Maryland) has written extensively about the Kelmscott Press and other aspects of fine printing in Britain and America.

This event marks the launch of the Kelmscott Press programme, and will be introduced by WMS President Lord Sawyer. Following the talk you can enjoy a virtual tour of our Kelmscott Press collection and a demonstration of Morris’s original Albion press.