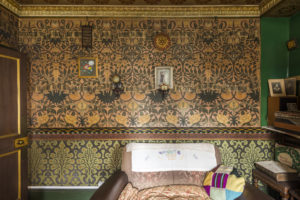 Decorated in the late Victorian era, this house lay undiscovered until a few years ago when its extraordinary story began to be uncovered. David Parr was an ‘artistic decorator’ who worked for some of the best known Victorian designers of the day such as William Morris and George Bodley.  He decorated churches and palaces for those who could afford such decoration but in his spare time he came home and decorated his humble terrace house in the same style.  Lived in by his granddaughter until a few years ago its interior remained a wondrous hidden secret.  Now it will be saved, restored and opened up to the public so that many more can enjoy its unique atmosphere.

Tamsin Wimhurst is a Trustee and founder of the David Parr House Charitable Incorporated Organisation which was set up in 2014 to conserve and open up the house to the public.  Before this she worked in curation, project management and education in the heritage industry, working with a wide variety of communities in order to help them access their history and encourage an interest in their past.  She is a passionate supporter of small independent museums, with a special interest in local and women’s history.