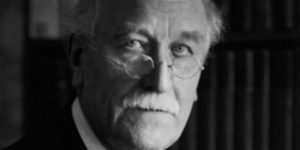 DUE TO THE COVID-19 OUTBREAK, THIS EVENT HAS BEEN CANCELLED

ALL TICKET HOLDERS WILL BE CONTACTED

To honour Emery Walker’s birthday week, Simon Loxley will be speaking about his new book; Emery Walker: Arts, Crafts and a World in Motion.

Emery Walker’s role as inspiration and facilitator for the private press movement and in the raising of general standards in printing and typography, is well-known among designers, bibliophiles and lovers of fine print. The effects of his contributions spread to the United States and mainland Europe, and the ripple of their influence helped determine the design ethos of the twentieth century and beyond. Yet Walker seems largely reflected through the work of others. Bernard Newdigate of the Shakespeare Head Press wrote: ‘Others besides myself would gladly and gratefully own that nearly everything that is worth anything in their own practice as printers comes directly or indirectly from his counsel and example.’ Philip Webb called him ‘the Universal Samaritan’.

In this talk Simon Loxley will discuss his latest book Emery Walker: Arts, Crafts and a World in Motion, in which he set out to build a picture of Walker: his work, his family and friends, and his world, re-examining what had hitherto been written about him.

Simon Loxley is a graphic designer and writer. His publications include Type is Beautiful: The Story of Fifty Remarkable Fonts, Printer’s Devil: The Life and Work of Frederic Warde and Type: The Secret History of Letters.

For this event we are delighted to offer two different ticket types: