‘The dear warp and weft at Hammersmith’: A History of Kelmscott House 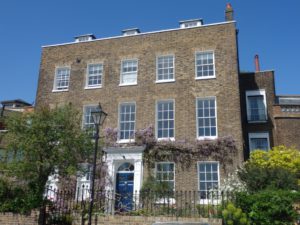 When William Morris reported to his wife Jane that he proposed leasing Kelmscott House, Hammersmith in 1878, he said ‘the house might be made very beautiful with a touch of my art’. Certainly this 18th century riverside house, where he spent the last eighteen years of his life, is one of the most significant of Morris’s homes. Whilst living at the property he began carpet weaving, wove his first tapestry Acanthus and Vine in his bedroom and continued his innovating approach to design, printing and dyeing techniques. When away from the house, Morris longed to return to these practical crafts, as he wrote to Georgiana Burne-Jones in 1879, ‘Lord bless how nice it will be when I can get back to my little patterns and dyeing and the dear warp and weft at Hammersmith’ – warp and weft being weaving terms.

Many well-known Morris & Co. designs are associated with the house. In 1878 Morris designed the Bird woven wool textile to hang in the drawing room of the property and Peacock and Dragon curtains adorned the room. Pimpernel wallpaper hung in the dining room where a chair was upholstered in Rose and Thistle and a chaise lounge in Brother Rabbit. Trellis wallpaper hung in Morris’s ground floor bedroom.  During the 1880s Morris established the Hammersmith branch of the Socialist League in the Coach House of the property where speakers included George Bernard Shaw and W B Yeats.  In 1891 he set up the Kelmscott Press – a private printing press – a few doors away from his home. Morris’s Albion printing press, used in the production of the magnificent Kelmscott Chaucer, still resides in the basement rooms of the property which now form the headquarters of the William Morris Society with its museum and exhibition space.

This is the first exhibition of its kind about Kelmscott House, described by George Bernard Shaw as, ‘this magical house’ and will feature original Morris & Co. designs, textiles and wallpapers, complemented by beautiful photographic prints. The exhibition will faithfully convey the atmosphere of the property bursting with creative energy and artistic activity.  Many influential Victorians visited the property including poet Alfred, Lord Tennyson, writer Lewis Carroll and art critic John Ruskin. The exhibition will also tell the story of those who inhabited the house before and after Morris including poet and novelist George MacDonald, Sir Francis Ronalds who invented the electric telegraph and actress Athene Seyler who died at the house at the grand old age of 101.

This free exhibition in the Coach House opens on 18th April and will be open, along with the rest of the Society’s museum, on Thursdays and Saturdays from 2pm to 5pm.