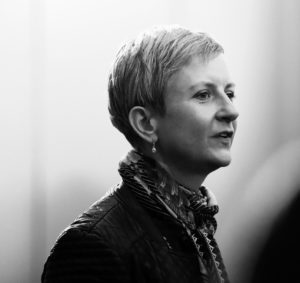 This year’s Kelmscott Lecture will be given by awardwinning writer Sarah Woods.

“Without order, neither the beauty nor the imagination could be made visible; it is the bond of their life, and as good as creates them. It both builds a wall against vagueness and opens a door therein for imagination to come in by”. William Morris, Some Hints on Pattern Designing

With Morris as our guide, and through attention to some of his wallpaper and textile designs, this lecture will explore the importance of pattern in all of our lives. Whether on our walls, shopping bags and mugs, in nature, or in the political and social choices we find ourselves making, pattern is not only all around us, but drawn deeply in us.

What sorts of patterns we make and repeat as craftspeople, individuals and societies are, as Morris says, both our walls and our doors. Our limits and our freedoms.

“In recurring patterns, at least, the noblest are those where one thing grows visibly and necessarily from another. Take heed in this growth that each member of it be strong and crisp, that the lines do not get thready or flabby or too far from their stock to sprout firmly and vigorously; even where a line ends it should look as if it had plenty of capacity for more growth if so it would”. William Morris, Some Hints on Pattern Designing

Sarah Woods writes across all media and her work has been produced by many companies including the RSC, Hampstead and the BBC. Recent work includes her opera WAKE (Birmingham Opera Company), composed by Giorgio Battistelli, PRIMARY (London Bubble), about the UK education system. Sarah has written extensively for BBC Radio, including an adaptation of William Morris’ NEWS FROM NOWHERE and a dramatization of Volume One of DAS KAPITAL by Karl Marx. Her play BORDERLAND, imagining a post-Brexit ‘Greater Britain’, won the 2018 Tinniswood Award at the BBC Audio Awards, for best radio script.

Sarah is currently writing the musical of the play she co-wrote with the late Heathcote Williams THE RUFF TUFF CREAM PUFF ESTATE AGENCY (Cardboard Citizens), about squatting and DIY culture, and working on a new libretto for Welsh National Opera. Her version of Marie Ndiyaye’s French drama HILDA will be broadcast on Radio 4 on June 7th.

Sarah is a member of the think tank The New Weather Institute, combining creativity and campaigning, and Narrative Artist with Cardboard Citizens. She currently teaches courses at Manchester University and the Denmark National School for the Performing Arts. Sarah is a Wales Green Hero.