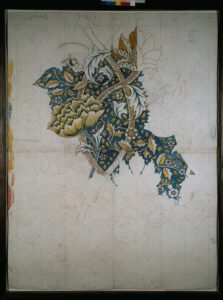 Windrush is a complex design depicting vertically meandering stems with large flower-heads, overlapping with the scrolling foliage and flower-heads of a smaller plant on a blue background. Morris would draw in black ink from the original design to outline one unit of the repeat. The design was then translated into wood by block-cutters, with the narrower lines made in metal to ensure durability during printing. Textiles were produced by a similar block printing process.

Like many of Morris’s later designs for both wallpaper and fabric it shows a strong diagonal bias, perhaps influenced by the design of a seventeenth century Italian cut velvet at South Kensington Museum. The design also introduces what Morris called the ‘inhabited leaf’, a floral pattern within a flower or leaf, derived from Middle Eastern art and the medieval textiles influenced by it.

Windrush was one of thirteen designs named after tributaries of the Thames, the river which was a source of inspiration for Morris and linked his two homes Kelmscott House in Hammersmith, London and Kelmscott Manor in Oxfordshire. Morris’s daughter May claimed Windrush was “named in memory of pleasant summer journeys along the Windrush valley”.

This design, together with a sample of Windrush printed linen, features in our current online exhibition, Highlights from The William Morris Society’s Collection.