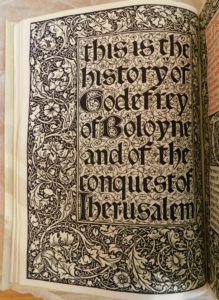 Of the several Kelmscott Press books within our collection, one that has a particularly interesting provenance and a fascinating story behind it is The History of Godefrey of Boloyne and the Conquest of Jerusalem.Printed in Troy type, with the list of chapter headings and glossary in Chaucer type, the Society’s edition of Godefrey of Boloyne was one of six printed in vellum at Morris’s Kelmscott Press in 1893. Priced at twenty guineas, the publication is extensively decorated with beautiful drawings by Morris for initials and borders. It is the first of the Kelmscott Press books to use the new printer’s mark designed by Morris. This was the fifth and last of the Caxton reprints and it was edited by Henry Halliday Sparling.

The Society’s copy is inscribed by Jane Morris: ‘Amy Jane Tozer on her marriage from Mrs Morris Feb 14 1908’.

Amy Jane Tozer, née Carruthers (1867-1961), knew the Morris family well through her father, John Carruthers (1836-1914), a civil engineer and economist. Morris came to think highly of John Carruthers and there are a number of surviving letters from Morris to him, usually concerning their shared interest in socialism. Carruthers joined the Hammersmith Branch of the Social Democratic Federation in 1884 and Morris thought him ‘an important member of our branch’. He became an active supporter of the Socialist League and subsequently the Hammersmith Socialist Society. Carruthers also accompanied Morris on several trips, including to France and Norway. The Society owns a copy of Carruthers’ Socialism and Radicalism, published by The Hammersmith Socialist Society in 1894.

According to the Kelmscott Manor visitor’s book, Carruthers and his daughter Amy Jane stayed with the Morris family on 14 and 15 October 1894. This wedding gift demonstrates the high regard in which Jane Morris held Amy Jane. Godefrey of Boloynehas been in the Society’s collection since the 1960s and in 2004, we received another generous donation consisting of a small archive regarding the Carruthers family. It was thrilling to see within this archive Amy Jane’s wedding present list – containing the Society’s copy of Godefrey of Boloyne, enabling us to connect these two items. Other notable wedding gifts Amy Jane mentions in her list include an embroidery given by May Morris, a Doves Press book from Emery Walker, a Book of Hours from Sidney Carlyle Cockerell, a table runner from Katharine Adams, a picture from T M Rooke, and books by Morris from her parents. Amy Jane went on to present her copy of the Kelmscott Chaucer to the National Library of Scotland in 1960 and presented Dorothy Walker with books and gifts including a photogravure of an Edward Burne Jones drawing Going to Battle, given to her by Henry Holiday before her marriage. Interestingly, the reverse of the wedding present lift details items ‘not retained’, including four volumes of John Ruskin!