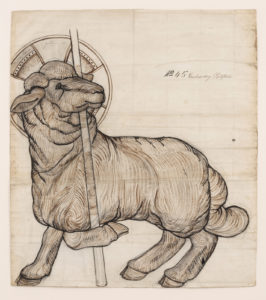 The Lamb and Flag Watercolours, designed by William Morris, 1877-78

Morris, Marshall, Faulkner & Co. developed a wide range of designs for church embroidery and vestments, including altar frontals, several of which were designed by Philip Webb including one for LLandraff Cathedral in Cardiff, Wales. Not a great deal is known about early embroideries made by the firm but there remain two existing altar frontals from the 1860s one of which is based on Webb’s Lamb and Flagg design at Llandaff Cathedral. This beautiful embroidery was worked on by Morris’s sister in-law Elizabeth Burden, the younger sister of Jane, who sewed her name and the date (1868) on the reverse.

‘Bessie’ became a member of the Morris household at 26 Queen Square, Bloomsbury. With only a very rudimentary early education she built up skills in embroidery and was described by Morris as having ‘complete mastery of the theory and practice of all kinds of needlework’ and was ‘a first class needle woman’ skilled in both theory and practice. Together with Jane she worked on many projects for the firm and excelled at crewel work (decorative stitches in wool yarn rather than thread) and had the rare distinction of having a stitch named after her: ‘The Burden’ was a revival of a medieval European stitch that gave a basket weave effect resembling woven tapestry.

The completed altar frontal shows the lamb and floral designs have been appliqued on a silk damask background with the inscription Ecce Agnus Dei, qui tollit peccata Mundi (Behold the Lamb of God which taketh away the sins of the world). The lamb represents Christ and his sacrifice, and the banner symbolises Jesus’s triumph over death at the Resurrection.

These original watercolour designs in the Society’s collection illustrate Webb’s talented draughtsmanship in embroidery design and his ability to communicate this to the embroideress.

Image: Watercolour of The Lamb and Flag design by Philip Webb