OBJECT OF THE MONTH: FEBRUARY 2020 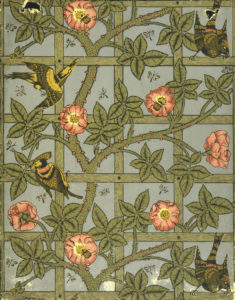 Trellis was the first design for wallpaper by William Morris, completed in 1862, featuring birds drawn by Morris’s friend and colleague Philip Webb. The William Morris Society owns five samples of Trellis in different colourways. The original design is held at the William Morris Gallery. Flower trellises also appear elsewhere in the work of Morris and his associates, for example in 1862 stained glass for St Helen’s, Darley Dale, and All Saints, Selsey, and in Edward Burne Jones 1863 sketch ‘wattled rose trellises inclosing richly-flowered square garden plots’ at Red House. This is a typical medieval garden plan, illustrated in numerous manuscripts and was the inspiration for Morris’s wallpaper design.

Initially Morris tried to print the company’s wallpapers using oil colours and etched zinc plates but these attempts were unsuccessful. Production was the then handed over to Jeffrey & Co., a well-established wallpaper firm who printed using the traditional block printing process and distemper colours. The design was registered in 1864. A blue-ground version of Trellis was used in Morris’s bedroom at Kelmscott House, Hammersmith where he lived from 1878 to 1896. A fragment of this original wallpaper has been preserved in situ. Trellis wallpaper from our Collection appeared in our highly successful 2019 exhibition about the history of Kelmscott House.