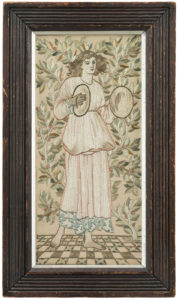 Minstrel with Cymbals, May Morris, embroidery on linen, c.1890

This beautiful embroidery, designed and stitched by May Morris, was adapted from a stained-glass window by her father. May changed the colour scheme to delicate silvery shades, altered the background foliage and added the pattern tiling which is picked out with gold thread. It is a rare example of a figurative embroidery by May’s hand. A stained-glass version of Minstrel with Cymbals, originally from Dalton church, can be seen at the William Morris Gallery and there are several up and down the country.

The Society is fortunate to have a ten year provenance to this object as a small archive was donated along with the embroidery. Mr Patrick Rice, owner of Minstrel with Cymbals, began an interesting correspondence with May in 1925 when alerting her to the purchase of the embroidery. They shared similar interests including the preservation of Red House. In one letter May expresses her annoyance over the title ‘The Red House’ and dislike over the modern conveniences, such as radiators and gas fires, which had now been installed at the property. May and Patrick Rice became actively involved in the appeal to preserve Red House with May urging him to gather local support. May wished ‘this monument of the beginning of modern English Art to be saved from destruction or neglect’. Writing personally about her former home, May believed that out of all Phillip Webb’s buildings, Red House was ‘the jewel’ and it should have a useful purpose such as a school of art and handicraft. Ultimately May’s wish came to fruition; the house was saved for the nation when it was purchased by the National Trust in 2003.

Minstrel and Cymbals was donated to WMS by Pamela and Elizabeth Rice in memory of Patrick Rice.