The Thames Journey from Hammersmith to Kelmscott – Day Six 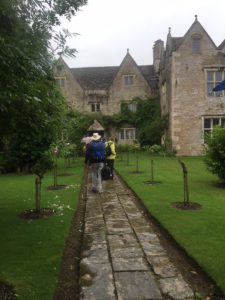 The last day of our six-day trip was marked by much rain, frequent laughter, regret at leaving the Midsomer Maiden, and pleasure on arriving at Kelmscott Manor.

This day, like the previous ones, began with a Morris Read-Around: each person read excerpts from the multiple accounts of Morris’s voyages up the Thames. As we bobbed in the water at Godstow Lock, waiting our turn in the lock, we read a long excerpt from “News from Nowhere” that celebrates, in lushly descriptive prose, the Thames between Oxford and Kelmscott.

Even in the rain, it’s an intensely beautiful part of the river. Once past the lock, we saw the remains of the medieval Godstow convent and then passed under the old, handsome, and very low stone bridge. Our boat cleared it by inches. If we had been fewer than twelve, we might not have weighed the boat down enough to make it. “Good thing we all had the full English breakfast,” someone quipped. 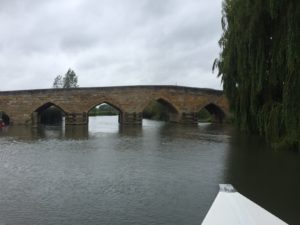 Medieval bridges abound on this part of the river. Like Morris and his companions we passed under New Bridge – “called so,” as their diary states, “because it was built in the 14th century and remains untouched to this day.”

Past Oxford, all the locks are hand-operated. There are nine of them on this stretch of the river, and over the course of the day we came to love the rhythm of them: the noise of the boat’s diesel engine revving in reverse as we sidled into place; the sudden silence when our skipper cut the engine, followed by the turbulent whoosh of water rushing into the lock as the sluices are opened; the pleasure of the boat rising from the semi-dark at the bottom of the pound to the light at its top. 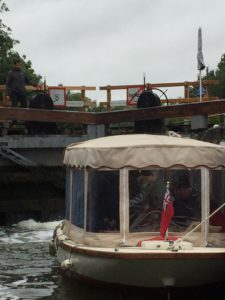 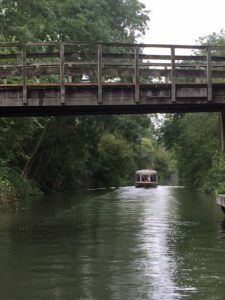 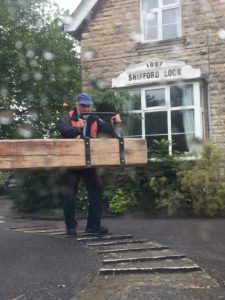 We were joined on this final leg of the journey by another 12-passenger launch. A dozen members of the William Morris Society gathered in Oxford for a one-day voyage on the Golden Slumbers, an electric boat. In order to preserve the batteries, its skipper kept his speed to about four miles an hour, and we followed suit. Our Slow Travel experience became even slower, which gave us a chance to relax fully, to enjoy the sinuous course of the river, and to appreciate the wildflowers that lined its bank in a continuous display of convolvulus, willow herb, purple loosestrife, Michaelmas daisies, and teazles, along with quantities of bulrushes, reeds, and the willow trees that Morris loved so intensely. 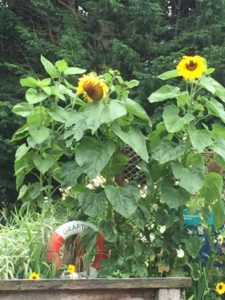 We were on the water for nine hours; it seemed short. Before we knew it we were walking towards Kelmscott Manor, where we were greeted by curator Kathy Haslam and Morris Society Chair Stephen Bradley.

Here is how William Morris described the experience in “News from Nowhere”:

We crossed the road, and again almost without my will my hand raised the latch of a door in the wall, and we stood presently on a stone path which led up to the old house . . . My companion gave a sigh of pleased surprise and enjoyment; nor did I wonder, for the garden between the wall and the house was redolent of the June flowers, and the roses were rolling over one another with that delicious super-abundance of small well-tended gardens which at first sight takes away all thought from the beholder save that of beauty. The blackbirds were singing their loudest, the doves were cooing on the roof-ridge, the rooks in the high elms-trees beyond were garrulous among the young leaves, and the swifts wheeled whining about the gables. And the house itself was a fit guardian for all the beauty of this heart of summer.

Once again Ellen echoed my thoughts as she said: “Yes, friend, this is what I came out for to see; this many-gabled old house built by the simplest of country-folk of the long-past times, regardless of all the turmoil that was going on in cities and courts, is lovely still . . .

She led me up close to the house, and laid her shapely sun-browned hand and arm on the lichened wall as if to embrace it and cried out, “O me! O me! How I love the earth, and the seasons, and weather, and all things that deal with it, and all that grows out of it – as this has done!” 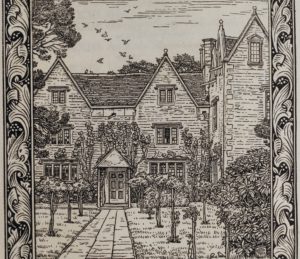 You can read the accounts of previous days here: