The Thames Journey from Hammersmith to Kelmscott – Day Five 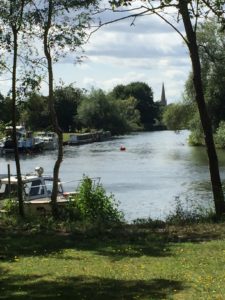 “We were soon under way and going at a fair pace through the beautiful reaches of the river between Bensington and Dorchester.”

These words from “News from Nowhere” exactly describe the start of our fifth day on the Thames. We embarked with bright sun and a brisk wind up the river from Streatley towards Dorchester early this morning. We looked with pleasure on the green banks, the sparkling water, the brilliantly colored kingfishers that seemed to be sporting with our boat, settling down in a willow just ahead of us then flashing out over the water as we approached, only to repeat the game.

David, our skipper, generously circulated steering duties during the day, and at various times Rob, Meg, Yasuo, Richard, Sue, and Michael took a turn. To our collective astonishment, the boat was not grounded, no collision ensued, and all hands remained on deck. 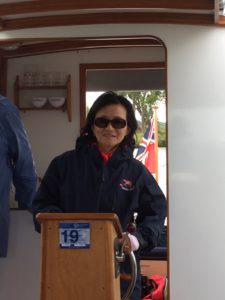 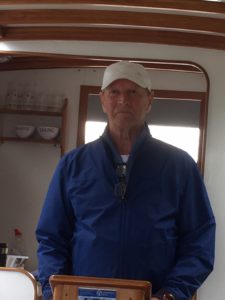 We ate our picnic lunches at a park by the river in Abingdon, with beautiful views both upriver (Abingdon Bridge) and down (St. Helen’s Church). Afterwards, we walked past the Abbey ruins and detoured into the Abbey gardens, where Richard, author of a book about North American redwoods, pointed out the beauties of the enormous Sequoia that had somehow found its way to Abingdon. 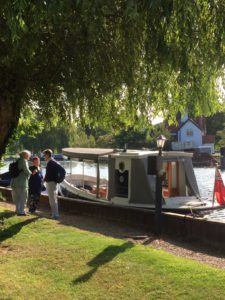 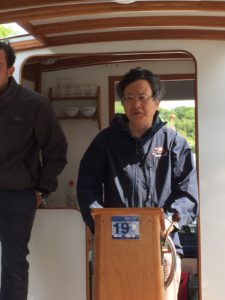 After lunch, it was time for a round of Thames Karaoke. Ruth and Rob had spent the previous evening assembling a playlist of River Songs that ranged from Paul Robeson to Joni Mitchell; even our barely-legal-age skipper was in awe of their eclectic good taste.

Before we knew it, we were at Iffley Lock. In the high-spirited group diary of Morris’s 1880 expedition up the Thames, William De Morgan added a marginal note: Iffley was “the original birthplace of hypotheses.” This occasioned a response by Richard Grosvenor: “During this and the preceding day the whole party were frequently caused to groan in spirit by a succession of puns so outrageous that no words could describe them and no intelligent individual do ought else but shudder at the recollection of their numbers and nature.”

We escaped Iffley unscathed by puns, but with time to admire the handsomest lock keeper’s cottage we’d seen so far: a Cotswold stone cottage surrounded by flowers, with lashings of lavender, rococo rosebeds, and a profusion of hollyhocks, fuschia, cardoons, ladies’ mantle, and creeping geranium.

We arrived in Oxford in time to check in at the hotel before hustling to the town centre to meet Martin Stott and Jane Bingham. Martin and Jane had arranged a viewing of Morris-related sites, beginning with the famous – or notorious – Oxford Union murals executed by Rossetti, Morris, Burne-Jones and friends during the long vacation of 1857. The tour also included Exeter College, where both Morris and Burne-Jones were undergraduates, and Harris Manchester College chapel, home to an extraordinary collection of great Morris & Co. windows. In a narrow passage off Holywell Street, Jan Marsh spoke about the birthplace of Jane Burden Morris just before we passed the former stables where Jane’s father worked as a groom.

By the time of our tour, the wind had died, all clouds had disappeared, and in the late afternoon sunlight the Cotswold stone of the colleges assumed its most alluring, golden hues.

William Morris fell in love with Oxford when he arrived in 1853; the city proved just as seductive in 2019.