The Thames Journey from Hammersmith to Kelmscott – Day Four 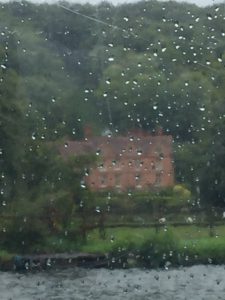 “Here we were on the Thames that is the Thames, amidst the down-like country and all Cockneydom left far behind, and it was jolly.”

So wrote William Morris to Georgiana Burne-Jones, recounting his voyage on the river near Streatley and Goring. We also had a jolly day, despite near-constant rain. The Midsomer Maiden has clear plastic panels that can be unrolled and zipped together, and we felt exceptionally snug, and generally dry, on today’s journey.

How do you pass the time on a rainy day inside a small boat? Admire the scenery, of course, though that was often obscured by the raindrips pooling down the boat’s plastic windows. Michelle Preston worked on a Voysey needlework kit that she picked up at the Royal School of Needlework shop in Hampton Court. Michael Robertson read La Belle Sauvage, Philip Pullman’s novel about a voyage on the Thames (though in the opposite direction and under different circumstances). Asa Inoue took a turn at the helm, valiantly steering us in low-visibility conditions. And after lunch at the wonderful Thames Lido in Reading (a beautiful transformation of the town’s Edwardian-era Ladies Swimming Baths into a stylish pool/spa/restaurant), everyone participated in Thames Karaoke. 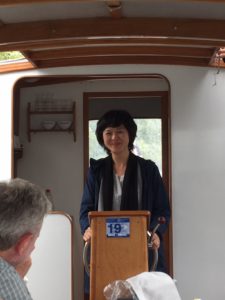 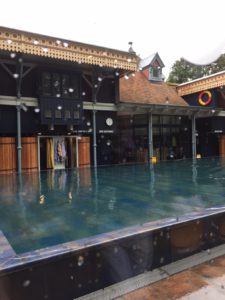 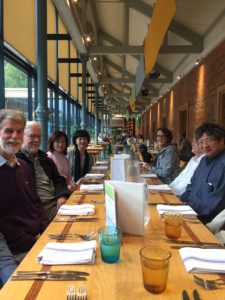 Thames Karaoke was invented when our skipper David, who can play tunes from his phone over the boat’s small speaker, invited someone to name their favorite song. Rob Hunter was game and chose Judy Collins’ cover of “In My Life.” When we challenged him to sing along, Rob obliged, and Thames Karaoke was born.  More Beatles-related songs followed. Yasuo Kawabata chose John Lennon’s cover of “Stand by Me.” Michael dedicated George Harrison’s “Here Comes the Sun” to the next day’s boating – a popular choice that led to Boatwide Karaoke.

Our skipper David, who’s in his early twenties, marvelled: “You’re introducing me to a whole new world of music.” Our reply: “That’s what comes of hanging out with baby boomers.”

David made a thematically appropriate choice of his own, Bruce Springsteen’s “The River.” Ruth Levitas responded with Ewan MacColl’s “Sweet Thames, Flow Softly.” Ruth followed that triumph with a suite of Morris-related songs, including Leon Rosselson’s “Bringing the News from Nowhere” and Happy End’s version of a J. Bruce Glasier lyric, “We’ll Turn Things Upside Down.”

By the time the last round of Thames Karaoke was concluded, we were in the Goring Gap, a beautiful valley created when the Thames cut through chalk hills millions of years earlier. We docked at Streatley, a tiny village opposite Goring.  For much of the day we’d been following the Oxfordshire-Berkshire border. Tomorrow we head north to Oxford, on a long and, according to forecasters, fine day. Here comes the sun.

Read about the previous days here: