The Thames Journey from Hammersmith to Kelmscott – Day Three 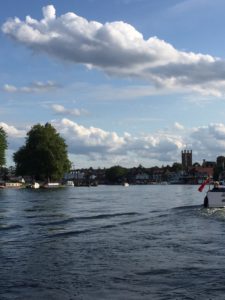 Travelling from Windsor to Marlow on his 1880 Thames journey, William Morris wrote, “the river was all new to me, and very beautiful.” We had the same experience on this clear, cool late-summer day.

Heading out of Windsor, we soon came to Boveney Lock, where, as we waited behind a large pleasure boat, we could fully appreciate our skipper David’s skill. While the boat in front of us lurched from side to side in the narrow lock, David brought the Midsomer Maiden into the space with the ease of a hummingbird approaching a flower. When group member Richard Preston mentioned that he owns a small boat in Maine, David generously handed over the helm, and under his guidance, Richard took the boat into the next lock with the same cool aplomb. The group responded with applause for both skippers. 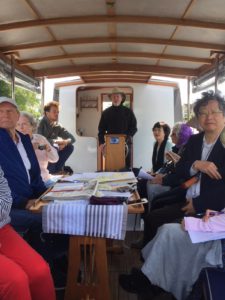 Today was a long voyage, with eight locks included, but the time passed with great ease and pleasure. Ruth Levitas and Rob Hunter, no strangers to the Thames River and nearby Thames Path, looked over their guidebooks and maps, explaining sights to the rest of us. Megumi Ebina and Asa Inoue used Yasuo Kawabata’s translation of “News from Nowhere” as informal guidebook, while Yasuo and his wife Hisako read an English edition of Morris’s novel. Ann Layton suggested that people might like to stretch their legs, and so at Temple Lock everyone disembarked and met up with the boat at the next lock. The Thames Path between the two locks was narrow and bosky, an inviting refuge.

Along the way, we continued to pass all sorts of pleasure boats, countless beautiful birds, and numerous interesting buildings. Some of these structures Morris knew and loved, such as Bisham Church, with its massive 12th-century Norman tower. Some he knew and, one can be certain, hated, such as Isambard Kingdom Brunel’s Maidenhead Railway Bridge of 1839, now regarded as a marvel of Victorian engineering. 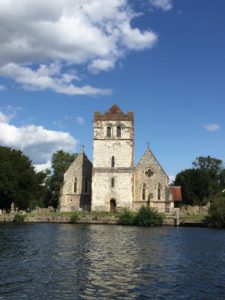 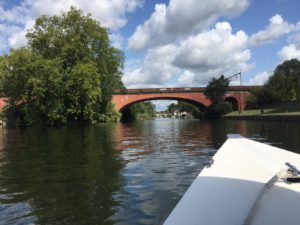 Morris certainly would have applauded our late-afternoon decision to delay our arrival in Henley in order to visit the ice cream boat moored just beyond Hurley Lock. As children played in the shallow water alongside, we gave our order to the genial captain/server, and left heavier by six cones and two tubs, but certainly much happier. 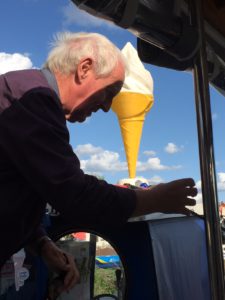 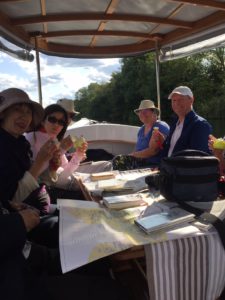 We reached Henley in early evening, delighted to arrive at this boat-mad town by water. We pulled up in front of the Leander, the famous rowing club – Henley Charter, owners of the Midsomer Maiden, had reserved rooms for the night. In addition, they had arranged for Peter Nahum, an art dealer famous for his appearances on Antiques Roadshow, to talk about Pre-Raphaelite art after our dinner at the club. Peter, an extremely entertaining speaker, brought along some spectacular items from his personal collection, which he casually passed around the table, including early drawings by Dante Gabriel Rossetti and Edward Burne-Jones, a haunting Ford Madox Brown self-portrait formerly owned by Brown’s son-in-law William Michael Rossetti, and a witty Burne-Jones caricature of William Morris mountain-climbing in Iceland. Perhaps the most striking item was a rare figure drawing by Morris, a design for a tile to be installed in Jesus College in Cambridge, one of Morris and Co.’s first important commissions.

On his 1880 trip, Morris recorded that he saw the Aurora Borealis at Marlow at 10:30 p.m. No one in our group reported any similar sighting – perhaps because by that time on a long day we were all heavily asleep.