The Thames journey from Hammersmith to Kelmscott – Day two 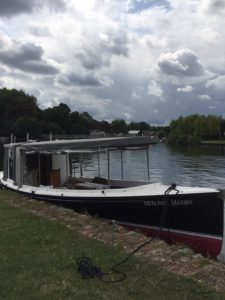 Today was our first day on the Midsomer Maiden, a beautiful 12-passenger Edwardian-style launch. Departing from the dock of the Mitre Hotel in Hampton Court, we headed immediately for Molesey Lock, the first of eight locks we would encounter. All were “pound locks,” a century-old technology that encloses boats in a “pound” – a dark, mossy holding tank. Over the course of several minutes the boat rises along with the inrushing water until you emerge into the light and air.

Freed from the lock, we moved ahead at the river’s speed limit of 8 kilometres – about 5 miles – an hour. That sounds slow, but on the low-slung launch it seemed a brisk pace, and everyone pulled jackets from their daypacks and faced into the wind, admiring the beautiful scenery. Morris decried the “Cockney waters” of the Thames above Hampton Court; he meant that the shores were lined with houses of the affluent middle class. We were more inclined to admire what now seem charming old houses, and we appreciated, once past Sunbury Lock, the long stretches on which the increasingly narrow river is lined only by greenery.

We quickly passed the point where the Wey empties into the Thames – mostly avoiding puns on the order of “There’s the Wey!” “Which Wey?” – and enjoyed looking, on Ruth Levitas’s cell phone, at Morris’s beautiful textile design “Wey,” part of his series of great designs named after tributaries of the Thames.

We stopped for an early lunch at Shepperton, followed by tea at the Runnymede Hotel. Our choice of teatime proved fortuitous: as soon as we entered the hotel, a violent rainstorm erupted. Fortunately, Sue McAllister had stayed behind in the boat, and she and our skipper David battened the hatches. We’re unsure what that means: what they actually did was to unroll the plastic coverings around the Midsomer Maiden’s sides, saving our gear and seat cushions from getting soaked.

The rain soon ceased, the sun reappeared, and as we continued upriver David drew our attention to local birdlife, including multiple brilliantly coloured kingfishers and an elegant red kite. Thanks to technology, we were able to alert WMS Honorary Secretary Natalia Martynenko-Hunt to our arrival in her hometown of Old Windsor, and she took a photograph of us as we waited in the lock there. 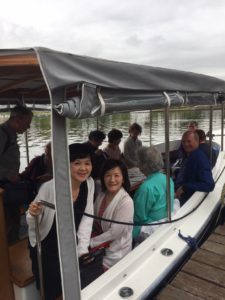 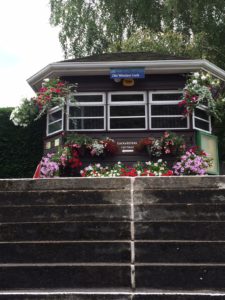 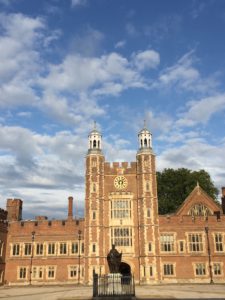 Soon after, we arrived at our mooring place in Eton and met Keeper of Art Philippa Martin for a private tour of the celebrated Morris & Co. tapestries in Eton College Chapel. The College commissioned a copy of Edward Burne-Jones’s great “Adoration of the Magi” design in 1895; ten years later they added two flanking tapestries of Burne-Jones angels to commemorate the Old Etonians killed in the Boer War.

In “News from Nowhere” Morris’s characters stop at Eton. Morris couldn’t resist a joke: founder Henry VI had intended the College to educate poor people’s sons, but “instead of teaching poor men’s sons to know something, they taught rich men’s sons to know nothing.” Nevertheless, concluded Morris, “it is still a delightful place.”

Read about previous days on the journey: