The Thames journey from Hammersmith to Kelmscott – Day One 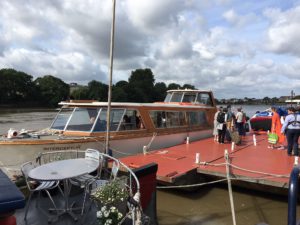 Early in the morning on Sunday, 11 August, with the Dove pub deserted and only the occasional jogger to be seen in Furnivall Gardens, twenty-seven members of the William Morris Society gathered at Kelmscott House to commence the first leg of a journey from Hammersmith to Kelmscott Manor, reproducing two voyages William Morris made in 1880 and 1881.

Society Adminstrator Cathy De’Freitas provided the voyagers with tea and pastries, and WMS Chair Stephen Bradley lifted their spirits with a brief talk before the entire group headed the short distance to Dove Pier, where the MV Interceptor lay waiting. The Interceptor proved to be a far more commodious and much less eccentric craft than the one that Morris, his family, and four friends embarked in on 10 August, 1880: the Ark, which May Morris described as “a large punt with the body of a small omnibus on top of her, a sort of insane gondola.”

It took Morris most of the day to reach Hampton Court; we arrived there in under three hours. But we shared his delight in going up the Thames, “slipping between the lovely summer greenery.” The sun was shining, the wind whipping pleasantly, and the moment we departed Dove Pier we were surrounded by wildlife – swans and cygnets, ducks, dozens of elegant, purposeful herons – and by hundreds of pleasure craft: sculls, sailboats, narrowboats, paddleboards, kayaks, and a gorgeous four-oared wooden rowboat that appeared identical to one that Morris might have seen.

Knowledgeable passengers pointed out landmarks: the Bull’s Head pub, where Oliver Cromwell supposedly stayed while his army was encamped on nearby Oliver’s Eyat; Syon House, with an awkwardly sculpted lion perched on its summit; the gleaming white stucco façade of Marble Hill House; one of the turrets of Horace Walpole’s Strawberry Hill just visible above the trees of Twickenham.

Sooner than expected, we rounded a bend and found ourselves facing the beautiful, imposing gates of Hampton Court. Their elaborate gilt screens gleamed against the grey iron railings. The gates were designed in 1701 by Jean Tijou, a French refugee, for William III, though the thrifty monarch stiffed him on his fee. Beyond the gates was the formal Privy Garden and beyond that the great east front of Hampton Court, a masterpiece of neoclassical symmetry. 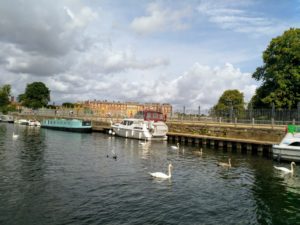 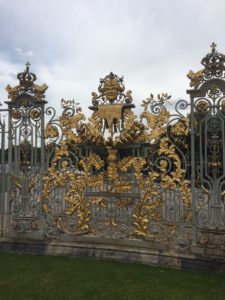 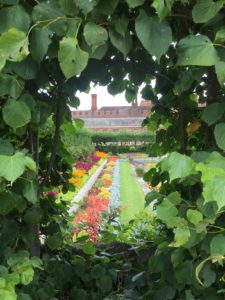 The Interceptor pulled up at the mooring just beyond. The majority of voyagers scattered to have lunch, tour the palace and gardens, and then return to London; the dozen travellers staying on for the five-day voyage from Hampton Court to Kelmscott wheeled their suitcases to the Mitre Hotel.

Morris and his companions spent their first night at the Magpie Inn at Sunburg. When they arrived and sat down to dinner, Morris exclaimed, “What a stink!” “It is nothing, sir, I assure you,” the waiter placatingly replied. “Is it a sewer?” one of the party asked. “Yes, sir, quite sure,” the waiter answered. Our twelve travellers mercifully escaped both bad smells and inadvertent puns.

Read the accounts of the other days here: