A NEW PRESIDENT FOR THE SOCIETY 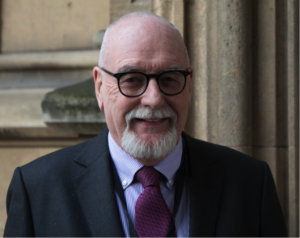 The William Morris Society is delighted to announce the appointment of Lord Sawyer of Darlington (Tom Sawyer) as its new President. He succeeds Jan Marsh, who has served the Society with distinction for the past ten years.

Tom Sawyer began his working life at the age of 15 on the factory floor of a County Durham engineering works. He went on to have a distinguished career in the labour movement, including serving as deputy general secretary of NUPE and later UNISON, before becoming General Secretary of the Labour Party from 1994-98. He recently stepped down as Chancellor of Teeside University after serving a twelve-year term.

Tom first encountered William Morris’s writing at the age of 21, when he read Morris’ classic Utopian work News From Nowhere. He says of his relationship with Morris:

‘Throughout my years as a union official I would often turn to Morris for inspiration and incorporate ideas from his work, particularly signs of change, into my speeches…His message and his principles are timeless. He has enriched many lives – mine included.’

Lord Sawyer has a particular interest in the art and craft of bookbinding. In 2008 he commissioned a number of designer bindings of seminal texts in the history of British socialism, including Morris’s News from Nowhere, for an exhibition which he organised at the House of Lords.

Lord Sawyer, who has been a member of The William Morris Society for many years, will take up the post for a five-year term at the Society’s AGM on 12th May, where he will give an introductory talk on how Morris has influenced him in life and politics. He says:  ‘I am very pleased to be taking up the Presidency of the William Morris Society. Morris spoke in an accessible and relevant way to working class activists like myself and I am keen to promote the continuing relevance of his ideas in contemporary society.’