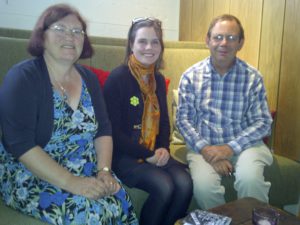 Iceland elected a new Prime Minister in November 2017. She is Katrin Jakobsdottir, leader of Vinstri Graen (RedGreen). She served as Minister for Education, Science and Culture in the Green Left Government of 2009-13 and has taught at the University of Iceland where she is a specialist in Scandi crime literature. She is also an enthusiastic Morrisian and gave a lecture to the Society tour in 2013.

In the lecture, entitled Good afternoon Mr Morris she demonstrated an extraordinary knowledge both of Morris’s range of contributions to society, culture and politics, but also to their continuing impacts in Iceland. She structured her talk after the time travel of News from Nowhere, around the idea of Morris’s reappearance in present day Iceland ‘our demented age’, where he joins her and her two brothers in a discussion over dinner.

The themes of their ‘discussion’ ranged over what she considered to be likely to be Morris’s chief interests on his return; the survival of the Icelandic way of life including the way Icelandic embroidery has influenced modern Icelandic design; the preservation of historic houses and the pressures of redevelopment;  Morris’s views on how to build new businesses based on beauty and quality; the importance of the local as opposed to the mass-produced;  the difficulties faced by socialism, particularly ‘the fragmentation that seems to be a constant of the political left wing, exactly as he experienced in the late nineteenth century’; democracy and the role of the media including social media and the experience of direct democracy in Iceland’s recent history; the chasm between the power of big corporations and the working class; the integration in perspective between ‘domestic beautification’ and the class struggle and equality; sustainability and the intrinsic value of wilderness, and finally his likely views on ‘Game of Thrones’.

A feminist, socialist, peace activist and climate change campaigner, she leads a coalition of centre right parties who mainly represent fishing and farming interests and are strongly Eurosceptic.

Photograph: Katrin Jakobsdottir centre, with current and former Society chairs Marin Stott and Ruth Levitas in a pub in Reykjavik.