A guest blog by Dr. Karen Attar, Curator of Rare Books and University Art at Senate House Library, placing the Kelmscott Press books in the context of an academic library today.

Numerous repositories in the British Isles have Kelmscott Press books and set store by them. The subject index of the third edition of the Directory of Rare Book and Special Collections in the United Kingdom and Republic of Ireland (2016) has 23 references to the Kelmscott Press: more than any other individual press, private or otherwise. And there may be further repositories that do not mention Kelmscott books specifically.

The survival of Kelmscott Press books is unsurprising, as their expense and exclusivity rendered them immediately collectible. The range of repositories containing Kelmscott Press books is more striking. Alongside national and large academic libraries they include museums: not only those devoted to William Morris, but also, for example, the Fitzwilliam Museum in Cambridge, given a set by William Morris’s daughter. Public libraries (Manchester, Birmingham, Liverpool, Preston, Dundee) feature alongside National Trust properties (Shaw’s Corner as well as Kelmscott Manor) and newer university libraries, such as Manchester Metropolitan University.

Some books are held as specimens of fine printing, while others are dedicated Kelmscott Press collections. The National Library of Scotland created a Kelmscott Press collection from books formerly scattered throughout its collections, a combination of legal deposit, donation, and purchase: a clear statement of its view of the Press’s importance. How hidden or obvious Press books are tends to depend on whether the repository contributes to a union catalogue (Library Hub Discover) and how the books are kept: a named special collection will normally be more prominent than books scattered among a library’s holdings.

Senate House Library was fortunate to receive its complete set of Kelmscott Press books all in one go, as part of the library of EMI director and bibliophile Sir Louis Sterling (1879-1958) given in 1956. Sterling divided his library into five sections: pre-twentieth-century literature; twentieth-century literature; private press books; illustrated and extra-illustrated books; and manuscripts. The Kelmscott books are a subset of the private press books.

Sterling acquired them effortlessly. A typescript document in Sterling’s archive lists books with the month and year of acquisition and the price, although not, unfortunately, the source of acquisition. The Kelmscott Press books are grouped together under the name of the Press, and are recorded as having been bought in 1929: some in March, the others in August/September. The impression is that all would have been available at the same time, and that Sterling chose to spread the overall cost of £1,386.3s.0d over six months. Prices ranged from £3.3s.0d for William Morris’s Gothic Architecture to a staggering £480 for the Kelmscott Chaucer. Gothic Architecture was one of a few titles priced below ten pounds; William Morris’s own writings stand out in this category. Nothing else remotely approached the cost of the Chaucer; the most expensive title apart from the Chaucer was Shelley’s Poetical Works (three volumes, £68) and the dearest single volume was The poems of John Keats (£48).

Had the books arrived alone, their acquisition would no doubt have been celebrated enthusiastically. As it was, the fact that other private press books, two Caxtons, a mediaeval manuscript, significant nineteenth-century literary manuscripts, and numerous early printed books including Shakespeare folios and early quartos accompanied them, somewhat eclipsed their magnificence. The half-century that has passed since their acquisition has probably increased their glamour since the 1950s. Nonetheless, the Kelmscott Press books were noted in two articles about Sterling’s library in the Times Literary Supplement, from 1939 and 1954 respectively, and also in the University of London Library Committee’s description of the Sterling library.

Being a large academic library is very good for contextualising Kelmscott Press books. At Senate House Library it is possible to compare the Kelmscott productions against all sorts of other materials: the output of other private presses; other works that emanated from the Arts and Crafts movement (and which satirised it, such as Gilbert and Sullivan’s Patience); the incunabula which inspired Morris; other editions of the texts published by the Kelmscott Press; earlier English attempts (Baskerville) to raise the quality of generally mediocre printing; Continental attempts to raise the quality of book design (Octave Uzanne’s ‘chocolate box’ books); and the standard and cheap productions against which William Morris rebelled. 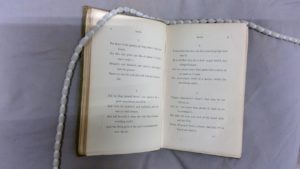 Two examples of books from the Senate House Library collection

Right: Tennyson’s Maud and Other Poems (London: E Moxon, 1855), an example of a plain non-Kelmscott edition of a book also published by the Kelmscott Press.

The Utility of the Beauty – and its Philosophy

The main use of Kelmscott Press books comes through teaching and exhibitions. Kelmscott Press have been shown in the London Rare Books School in courses on ‘Modern Firsts’ and on paper; the latter involved poring avidly over watermarks. The books’ sheer beauty renders them ideal for exhibitions. Our most obvious use of them for this purpose has been in displays of private press books (Kelmscott occupied the central case), of book illustration, of icons of western literature (Beowulf), and of Chaucer. William Morris’s News from Nowhere featured in an exhibition about Utopia; The Life of Cardinal Wolsey, by George Cavendish (1893) in an exhibition on the English Reformation.

Private press books generally lend themselves well to discussion of the material book, lively in an age where texts are often readily available online and the artefactual element of books gains in significance. There remain new ways in which we can use Kelmscott books. One is as physical examples of international cooperation (William Morris’s ink came from Germany and his inspiration for fonts came from Germany and Italy). Moreover, the books are material examples of the relevance of the past, as Morris adapted his response to fifteenth-century imprints for his age.

Much of Senate House Library’s contemporary evidence of the Victorian period is of misery, crime and poverty as portrayed in the novels of Charles Dickens, expositions by Charles Booth, government reports, pamphlets generated by the Charity Welfare Organisation, and so on. Through the Goldsmiths’ Library of Economic Literature we have much on the triumph of industrialisation. The Kelmscott Press provides tangible proof of the wealth of late Victorian England for a more nuanced picture, and of defiance of industrialisation. The physical reminder of the possibility of alternative views renders the books important in the context of a University, always questioning and (re-)assessing. Moreover, they represent aspiration: a quest for the best, and its achievement. Such a quest is what scholarship is all about.

Thank you to Dr. Karen Attar, Curator of Rare Books and University Art at Senate House Library, for this article.